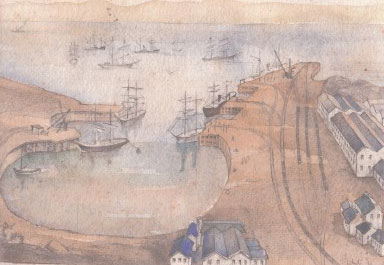 Artists Impression of the Port of Kennetpans

This is a copy of an original picture lent to us by Mr Stokes of Kincardine.

I would imagine the picture gives a fairly accurate impression of the port at its peak, with one or two exceptions. There was never the distance between the west jetties and the warehouse complex as shown.

Also, I would doubt whether there was ever a basin of this extent at the bottom of the picture.

It clearly shows the distillery buildings at the bottom middle of the picture plus Customs House and offices bottom right. It also gives the scale of the warehousing connected to Kennetpans.

Included are bonded stores, maltings and granaries. The tramlines are clearly visible running down the west jetty right up to the steam crane which is present in the photograph of the west jetty c1890.

This port was ideally situated on the River Forth in the shadow of the Ochil Hills close to both Stirling and the fertile lowlands of Fife as well as some of the earliest coal pits in Scotland.

The main trade from this port was exporting coal and salt before the port was used in connection with two great distilleries of Kennetpans and Kilbagie. The Steins exported vast quantities of spirit and such things as pork from this port and imported huge amounts of rye for distilling purposes.

It is interesting to note the small bing on the far side of the harbour was formed by ships off loading ballast before loading cargo. Several coins of Scandinavian origin have been found amongst the shale.

The Steins took advantage of their location and owned a fleet of ships two of which were built at Kennetpans.

Ships owned by the Steins 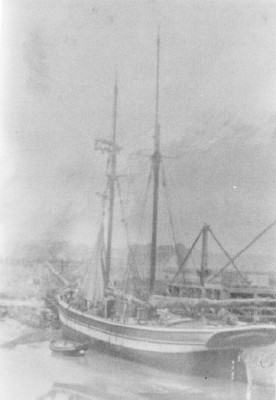 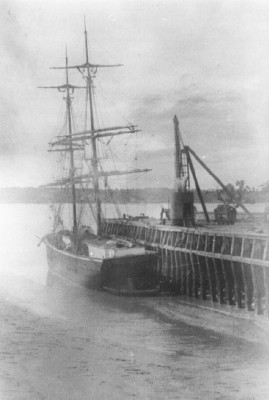 As you would expect from the Steins their venture into shipping was not plain sailing and their ships were just as unlucky.

From the Mary & Margaret being run down by an English collier to the Elizabeth being captured by a French frigate.

It is also interesting to note that they were involved in the lucrative whaling market with their Brigatine Neptune.

The tides in the River Forth, for several miles, both above and before Clackmannan, exhibit a phenomenon not to be found (it is said) in any other part of the globe.

This is what the sailors call a leaky tide, which happens always in good weather during the neap tides; and sometimes also during the spring tides, if the weather be uncommonly fine.

When the water has flowed for 3 hours, it then turns back for about an hour and a half, exactly as far as when it began to flow; it returns immediately; and flows during another hour and a half to the same height it was before; and this change takes place both in the flood and the ebb tides.

So that there are actually double the number of tides in this river that are to be found anywhere else. In very boisterous weather, however, these leaky tides are by no means regular; but water only swells and gorges, without any perceptible current, as if the two tides were acting against each other.

The cause of this irregular phenomenon in the tides of the river Forth may be a subject of inquiry to the philosopher; for it has not as yet been discovered.