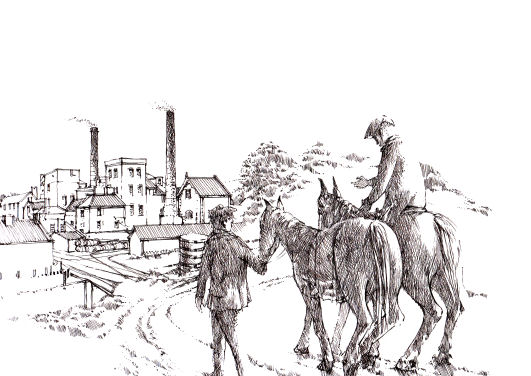 According to family legend, John Haig was riding with his old servant along the road which runs through Windygates when his attention was drawn to the old Cameron Mills on the River Leven. John turned to the old retainer and said “d’ye ken Sandy – there is money to be made here – aye from whisky”.

He leased the land from his friend Captain Wemyss, the lease being taken out in his father’s name since John was still a minor.

By 1830 John Haig had installed a pair of Stein’s continuous stills. These were one of the first to be installed outside Kilbagie. Haig’s commission or royalty to Robert Stein was 1d per gallon of spirit. Production rose to nearly 150,000 gallons of whisky within the first year. Haig soon decided to set family loyalty to one side and switch to the much more productive Coffey still. By 1877 the distillery had an annual output of 1.3 million gallons which could be increased if necessary. It’s whisky was said to have no rivals.

By late 1870/ early 1880s Fife had become home to thousands of Irish navvies, here to build the great Tay and Forth bridges. They naturally brought with them a taste for Irish whiskey which Cameronbridge was happy to supply – a triple distilled whisky with the taste of Jameson’s. Strong drink and high winds proved a lethal cocktail as one of the designers of the Forth Rail Bridge noted “The Hawes Inn flourishes too well for being in the middle of our works”. Who can say how many of the 57 men who were killed building the bridge went to their graves with a bellyful of pot still Irish?

Today’s production figures for Cameronbridge are staggering – over 100 million gallons of spirit produced annually, two thirds to make grain whisky from Bells to J & B to Johnnie Walker and one third to produce brands such as Gordon’s gin and Smirnoff vodka. The site now covers a massive seventy five acres and this distillery is described as the engine room of Diageo, the biggest producer of Scotch whisky.

To this day Cameronbridge Distillery is the largest spirit distillery in Europe.