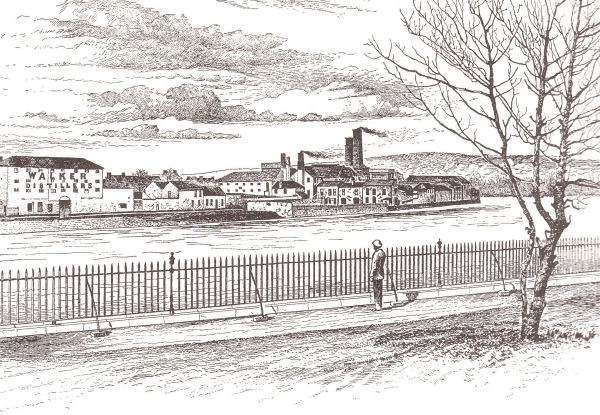 Known as Stein Brown & Co, this company was owned by the Steins with a 1/5th share belonging to John Brown who was also a Scot. By 1822 the distillery produced 231,790 gallons of spirit which was equal to one twentieth of the total Irish production.

Alfred Barnard’s description in 1885 was of a “fine old distillery planted on the banks of the Shannon, the works and buildings covered upwards of six acres”. The distillery buildings appear to have been handsome structures giving the appearance of an old baronial castle. Bernard went on to mention the manager’s mansion “not only for its size and antiquity, but for the beauty of its location, a view that could not be surpassed from any house in Ireland”.

The distillery changed hands several times before being acquired by Archibald Walker (another Scot) in 1868. From then on the distillery was known as Walkers Distillery. The distillery operated 3 copper pot stills which produced a whiskey of good reputation known as Pot Still Real Irish Whiskey.

By the mid 1880s the distillery employed 70 men incorporating the usual carpenters, coppersmiths and engineers, its production had risen to 300,000 gallons but by then this made it one of Ireland’s smaller distilleries.

Walkers was badly affected by the financial downturn in the early 1900s and was sold to Scottish Distillers Company (DCL) who eventually closed the distillery c1919. These tokens were purchased from the Limerick Distillery and then exchanged for grain at the grain yard.