It would appear it was not only distilling the Steins were involved with and they even ventured into banking, with disasterous results.

In 1800 The Workington Bank was founded by Messrs Wood, Smith and Stein & Co. Little is known about this bank and only a few copies of their bank notes exist today. 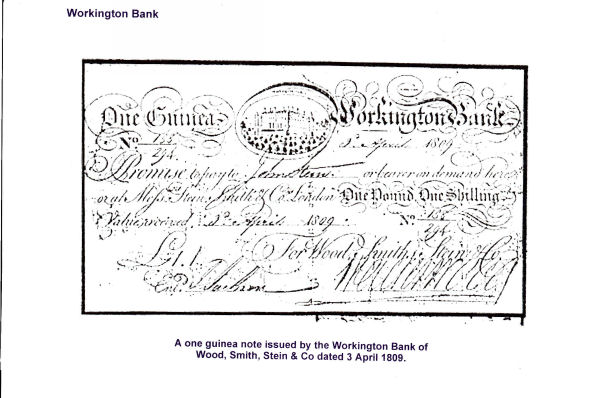 It was not a good time for country banks . As agriculture was going through a boom and bust period, coupled to the fact Workington’s major customers were connected to the manufacture of arms and the iron trades, a brief period of peace with France did not help. The Workington Bank went into recievership in 1812 with debts totally £120,000 (approximately £20,000,000 today).

An Action of Insolvancy was raised by the Commission of Bankruptcy in London on 11th August 1812 against ‘John Stein, Thomas Smith, Robert Stein, James Stein and Robert Smith, who carried on Business as Bankers, Insurance Brokers and Merchants in Fenchurch Street, in the City of London, under the firm of Stein, Smith and Company, and in the Royal Exchange, in the City of Edinburgh, under the firm of Scott, Smith, Stein and Company, and of whom the said John Stein, Robert Stein and James Stein also carried on business as distillers’.

Read more about the Workington Bank in an article written by Michael How, Times and Star, Workington for The British Banking History Society