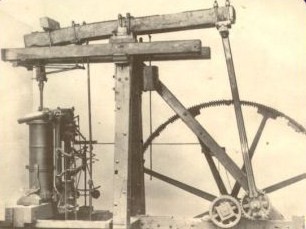 In 1763, a Scottish scientific instrument maker, James Watt, was given the job of repairing a model of a Newcomen steam engine for the University of Glasgow.

He noted how inefficient it was and after much deliberation the breakthrough came to him on a Sunday afternoon walk  “I had not walked further than the golf house when the whole thing was arranged in my mind”. If he had just walked a little further we may have had the jet engine!

By condensing the steam in a vessel separate from an engine’s cylinder, Watt reduced fuel consumption by up to 75% compared with the Newcomen engine.

Watt’s next improvement was to increase the power of the engine by sealing the top of the cylinder and injecting pressure into the upper part of the cylinder instead of relying on atmospheric pressure alone.

Watt was still discouraged by seemingly insurmountable problems before a marketable engine could be perfected.

Watt told Matthew Boulton his ideas on improving the engine and Boulton agreed to fund the development work on a test engine. Watt was soon able to get the first engine working and obtained his patent in 1769.

The rest is history.

James Watt and Matthew Boulton were commemorated by the Royal Mail in 2009 by including both men in their limited edition stamp collection ‘Pioneers of the Industrial Revolution.