The Steins experimented with several new designs of stills but soon realised that a shallow still with an enlarged bottom coupled to a larger furnace would bring the wash to the boil much quicker.

This gave the Scottish distillers a much improved discharge rate of anything up to 94 times in a 24 hour period basically giving them duty free production. 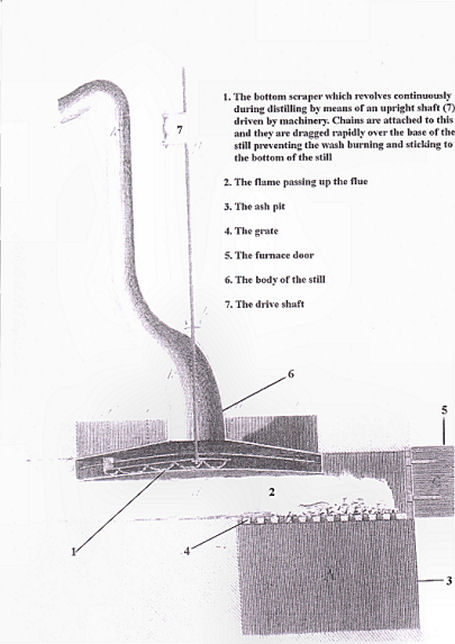 Invented by Robert Stein of Kilbagie

The ‘Henry Ford of the Whisky Industry’

In 1826 Robert Stein patented a revolutionary type of still, one which would change the whisky industry forever.

Stein had invented a method of continuous distillation which meant spirit could be produced much faster and more efficiently than had previously been the case in traditional pot stills which had to be cleaned and recharged between batches. This advancement should not be underestimated to the importance of the Scotch whisky industry. A large pot distillery such as Macallan could produce 5,000 gallons per year while a Stein still could produce 150,000 gallons – a 30 thirty fold increase.

This ingenious device consisted of a column twenty – thirty feet tall and was divided into a series of small connected chambers by plates made of haircloth. Preheated wash was scattered as a fine fist into the chambers where it came into contact with steam. The alcoholic vapour rose up the column until it condensed as spirit while the water and solids in the wash attached to the haircloth diaphragms dropped down and were removed at the foot of the still. The whisky produced from this still was bland in flavour and high in strength 94 – 96 ABV thus ideal for rectification.

The first continuous still was located at Kilbagie. By 1826 Stein had obtained permission to run trials at his brother’s distillery at Kirkliston. It did not take long before this new still was in operation throughout the family’s other distilleries. Some of the Stein stills were still in use until the 1920s. 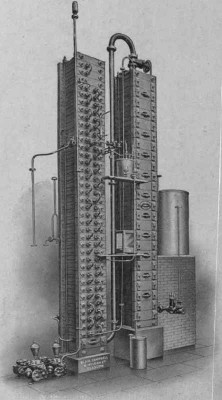 Patented 1830 by Aeneas Coffey, head of Customs & Excise in Dublin.

Coffey’s patent was a bigger, far more complex design than Steins. It was also a lot more efficient. It is a tribute to its design that Patent stills made today are largely the same as Coffey’s original concept. Its disadvantages included a high initial cost and the whisky lacked character and flavour.

Ironically the seeds of destruction of the Irish whiskey industry were sown by one of their own, Aeneas Coffey. It is hard to imagine that, by the early 19th century, Irish Whisky dominated the world markets. Their only mistake was turning their backs on Coffey’s improved patent still. Almost to a man Irish distillers insisted distilling could only be done using traditional pot stills. Coffey turned his sights on the other obvious markets, Scotland, and the London gin merchants, where he found plenty of willing customers,

The first Scottish distillery to install a Coffey still was the Grange Distillery at Alloa which was owned by Andrew Philp, a cousin of the Steins. This investment proved to be disastrous and the distillery went into sequestration in 1834. It wasn’t only to be the Grange Distillery that closed. The massive production achieved by these stills meant Scotland was flooded by cheap whisky which resulted in many distilleries being uncompetitive.

See an advert  from a local engineering company that specialised in manufacturing Stills and other distillation equipment.