I am favour with yours of 12th Currt To the first I would wrote in course that was 1 cd for four drawings of Rapport of Mrs Liptraps Engine, from your not mentioning the Report of it in your last I supposed  it is not yet at work, when it is I will be glad to hear is fine for – I observe what you say as to the power of the Engine & that 110 turns per minet is the proper speed from what I have seen of Mill Stones for grinding Raw barley. I could wish mine of 4 feet O In in diameter but the power must be made proportionable so as to carrie them on with ease 110 times in the Minet  unless they were to drove at that rate . I would on the other hand prefer the four feet stones as these well drove would be preferable to the others about 94 times. At same time as I put the whole under your direction from your superior knowledge I leave you to determine which of the Mill Stones would grind most – I am inclined to think with the little additional power, that the largest ones would be preferable and if you are of the same opinion let the power be adapted to it. I have a low two storey granary hard by my work 146 feet long, 64 feet wide the lower part is 7 feet 6 in in height to the upper left, and then it is 6 feet 9 inches from the left. To the levelling of the wall heads. It is roofed upon wooden posts run the short way say 64 feet in length within from east to west, 18 feet 3 in spaces each roof in width from south to north. Being eight separate roofs supported and (???) & wooden posts, with leaden gutters. I would incline to take of two of two of the pieces from North to South will make deducting the South invide wall to be built. Leaves the space to be 34 feet 6 in width and the length may be 30, 36 or more from east to west and roofed in agreeable to your plan. The boiler from the situation must be placed on the North east corner of the house. On the North the sides are open which answers your plan and the sides join with my granary.

As I must put that square of the Engine House out of the loft in order to build the sides A thro B within the present house and as I can use all the other part of the present Granary for holding grain it becomes  (??????)
for the Engine to be placed in the North & east corner of it and both these sides of the building are clear.

I observe your ground story is marked of at 9 feet 6 In in height, second storey 10 feet 6 in and upper story but then you recommend the ground from P to 2 the walls of the Mill to be about three feet deeper in the other.

My buildings are on a flat Karse or clay foundation the surface not above one foot above the high sea mark and this house being situate within 3 foot of the harbour that runs parallel with the east of my Granary (????)   would not suite to found deeper than the present surface upon which my present walls are built they are founded upon plank and 26 in thick build with    on with the House and keep the ground story 3 feet 6 inches more than your point and by your plan that will make it 13 feet in height. Incase I should mistake any part of it would wish your  (????) and use a proper person for per intend and direct the up puting of the boiler were either an Engine Smith or Millwright if acquainted with the execution of that work you have done before in that way, he would be usefull & confirm my work people when going on if perfectly agreeable to the plan. Mr Geo Miekle an expert Mill wright & has also a small foundery at Alloa has been from home for some weeks but is expected at Alloa as tomorrow or next day. I will in the meantime take his asistance in going on with my Mill house. I will keep it as well as have all the Machinery adapted for four pair of stones in the way with Mssrs Luptraps, only the two pair for barley to be 4 feet 8 in in place of 4 feet providing you approve of the largest and one pair of these only to go at one time. I once thought of two pairs to go at once but that I have laid a side in hopes you will order the Engine with such power as make for grind a sufficient quantity with one pair. All of the Mill Stones I will take of yours

The London Distrs – In regard to the cast Iron shaft, the two Bevil wheels of cast Iron with Iron teeth. The run of the spur wheel of wood with Iron arms & a pocket to embrace the upright shaft. The dimensions are Arundles & the Mill stones spend less. I would have the whole of these made with you, as I wish to have them made under your eye & by such hands as you know will execute them properly.

The spur wheel & trundles, I will get done here in wood by Mr Meickle, upon your sending me a draught or directions for him to make them by the Mill Stone spindles I should also wish done by you and I trust you get the prices made  as moderate as you find the work can be expected for after consultations with Mr Meickle I am of opinion my Mill house. To (???)  with my present building may be 34 feet 4 inches by 30 feet within, as the greater part of my grinding can at once be run from the mill house into the upper or lower loft of my Granary that will surround two sides of it. The one loft being on the ground floor the other 7 feet 6 in up the side walls of this present granary being only about 14 feet 6 in in height. The mill house after that can be freely lighted upon all sides by that both mide & upper stories will be well lighted.

I will cause Mr Mickle make out a plan of the house as we go on with & send you a sketch of it.

The border I would incline to be made particularly the bottom of it of Iron as the bottom & under parts. Of sides, I would run high, to be of copper. The upper part of the sides & top I will have made in copper as I believe that part requires no great thickness of copper. Be pleased to let me have a drawing for the boiler to be done in this way. The cylinder and every other part of the work that lyes in your way that can be more completely done with you then here, I beg you order the whole to be made & forwarded for this with all possible speed the reason being so far advanced makes us doubly anxious to have this whole done with the outmost expedition.

The material comes from London Mssrs Sanderman & Graham Marches there will them forwarded by vessells that come direct to this place.

What comes by the way of Hull River may have come by the way of Kincardine, Alloa, Boness or Carron or even Leith in case of  no vessell    offering for these first places. It would not answer to bring any part by the way of Clyde, it being troublesome to get them down the canal & then over here.

I attend to the sketch of your proposals which I approve of only that you restrict the grain that may be grind to have use of my Distry, that is my sole & present when intention but were I at any time giving up or laying aside the business for a time during your grant and finding it convenient at such a time to manufacture grain for other purposes, I do not apprehend you would have any objection to my using the Mill in that way while I carrie on the distilling  business & I have no other (??? )  to grind grain for any other purpose.

Kennetpans is in the Parish & County of Clackmannan North Britain when Mssrs Dick makes out the Indenture or agreement it will be signed and returned you. I am with esteem,
Gentm
Your most Obedient servent
John Stein
Ps in case this long hurried letter which I wish you may make out so as to understand the whole & that no delay may come in the (-) 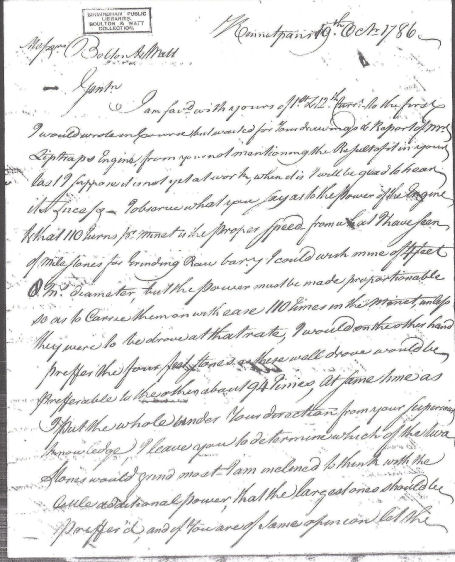 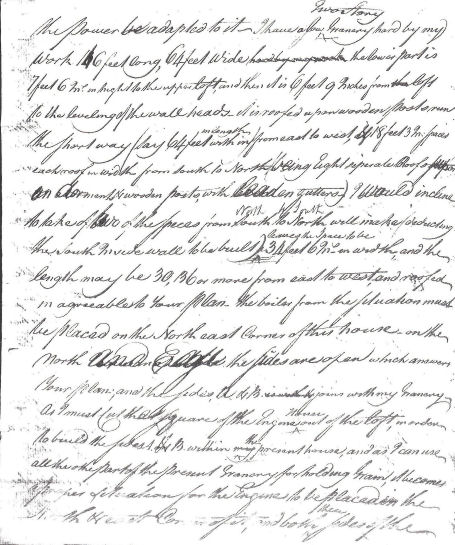 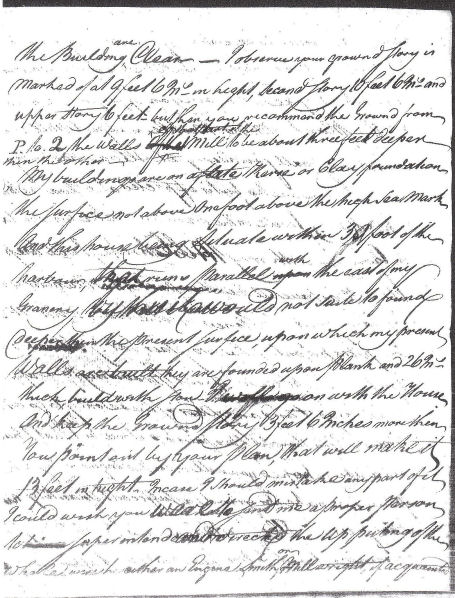 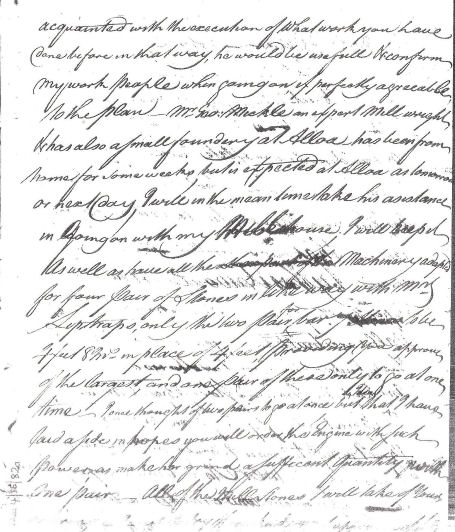 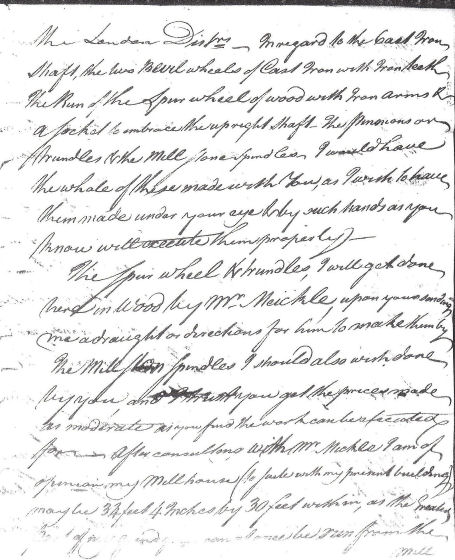 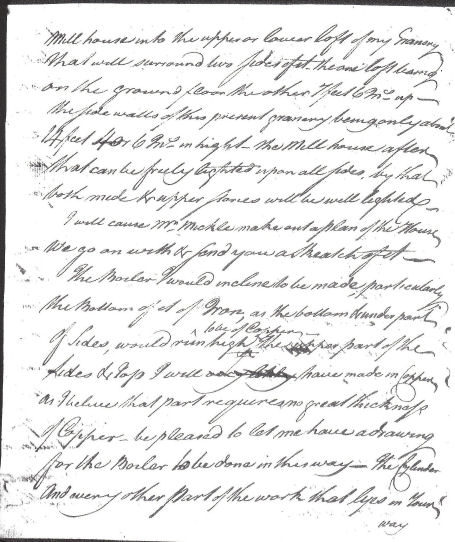 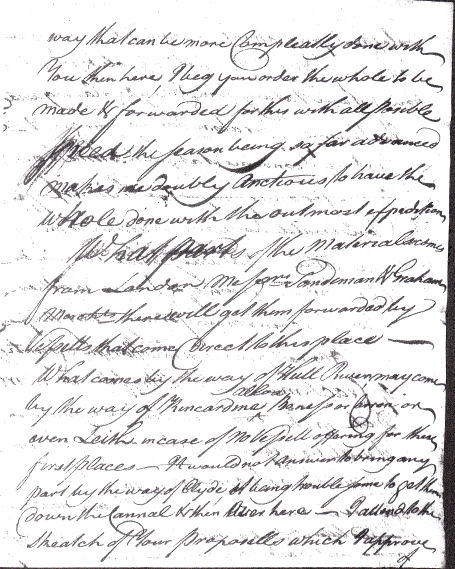 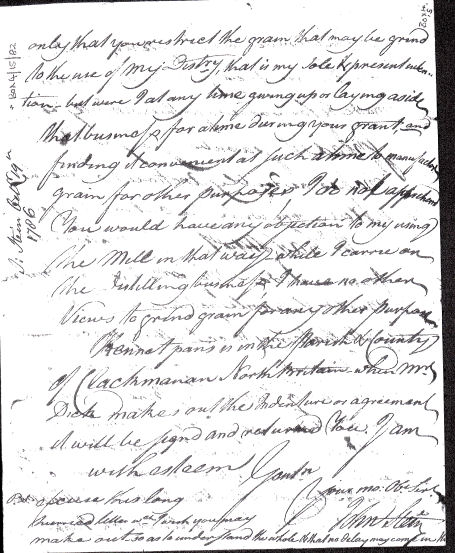